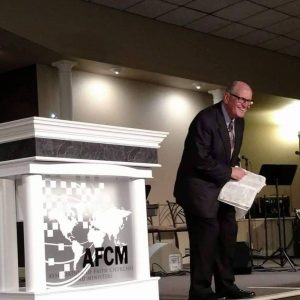 Dr. Julius “Jim” Kaseman is a graduate of the 1975 charter class of RHEMA Bible Training Center in Broken Arrow, Oklahoma.  He holds credentials with RHEMA Ministerial Association International and the Association of Faith Churches and Ministers International.

Jim graduated from Minot State University, Minot, North Dakota in 1970 with a Bachelor of Science Degree. In July of 1994, an honorary Doctor of Divinity degree was conferred upon Jim by Dr. R.E. Anderson from the School of Bible Theology in San Jacinto, California.

Jim entered full-time ministry in 1975 when he accepted the invitation to pastor a church in Minnesota.  A year later he was called to the itinerant ministry. As a result, Jim Kaseman Ministries was founded and became instrumental in establishing churches in Minnesota and the surrounding area.

In 1978, Jim founded the Association of Faith Churches and Ministers International (AFCM) to promote fellowship among the ministers who shared his vision of taking the Gospel of Jesus Christ to the world.

In addition to his responsibilities with AFCM, Jim ministers throughout the year in churches, conventions, and Bible schools.  Having seen in his own life the transforming power of the Word of God, his desire is for every believer to live a victorious Christian life.

Jim and his wife, Kathleen, have five children, twelve grandchildren, and eight great-grandchildren. The Kasemans make their home in sunny Florida.